This adorable-looking little chappie should have pride of place on your table this Easter!

As well as being super-cute, this little loaf is completely delicious. Our Easter Bunny Bread usually comes to the table sitting in his vegetable patch – fresh lettuce, carrot sticks, cherry tomatoes, cucumber wedges and broccoli florets. We add a spread or a dip (maybe some salted butter or houmous or a tapenade or some pesto?) and everyone digs in. In other words, this Bunny is the perfect antidote to the Easter Sunday sugar rush!

Or if a veggie platter is not your thing, I think this Bunny would be delicious with a big bowl of vegetable soup instead!

This Bunny is far easier to make than you might think. I use a no-knead method which just requires a bowl and a spoon to make the dough plus a little bit of time. Shaping the loaf is no harder than playing with play-doh – promise! You. Got. This.

This recipe makes sufficient dough for 2 loaves of Easter Bunny Bread. One to keep and one to share.

A delicious, golden loaf of bread in the form of a bunny, perfect to grace your table this Easter.

40g rapeseed oil (or any other neutral oil)

4 raisins or other similar sized dried fruit for the eyes

Place both flours, along with the sugar, yeast and salt in a bowl and mix with a spoon to combine. (I use a large mixing bowl with a capacity of at least 3 litres. This is to allow space for the dough to rise. No mixing bowl? Use a large pot or saucepan instead.)

Add the oil, water and milk. Start to mix with a spoon and, as the mixture becomes difficult to stir, switch to using your hands. Squish and squeeze and pummel the dough until it becomes one cohesive mass. It may seem like the dough will not absorb all the flour… fret not! Tear the dough open and use the wetter inside of the dough to pick up all the flour. Repeat until you have picked up all the ingredients in the bowl and you have a rough ball of dough.

The next steps take the place of traditional kneading. While the steps are spread out over 45 minutes, very little active effort is required during this period, so it’s a good time to get on with laundry/mopping the floor/playing board games etc!

After 15 minutes, flip your dough upside down inside the bowl. Repeat the process of pulling the edge of the dough into the centre, all the way around the ball of dough. Then flip the dough so that the smoother side is on top again. Cover the dough and set a timer for 15 minutes.

Again, flip your dough upside down. Pull the edges of the dough into the centre and flip it back over again. Cover and set a timer for 15 minutes.

Repeat the previous step one final time. In other words, flip the dough, pull the dough from the edges into the centre, flip it back and cover. THIS TIME, however, leave the dough to rise for 1 hour to 1.5 hours at room temperature until it has approximately doubled in size. After the rising period, remove your dough from the bowl. The dough will deflate and shrink a bit in size. This is fine and expected.

To form the bunny you need to separate the dough into 11 balls of varying sizes. I’ve listed approximate weights below to guide you as well as “by eye” notes. Remember – part of the fun of Easter Bunny Bread is his character. No two Easter Bunnies are ever the same!!

2 x ears – 43g each – each ball is about twice the size of the hands, a little bigger than the feet balls, if possible. 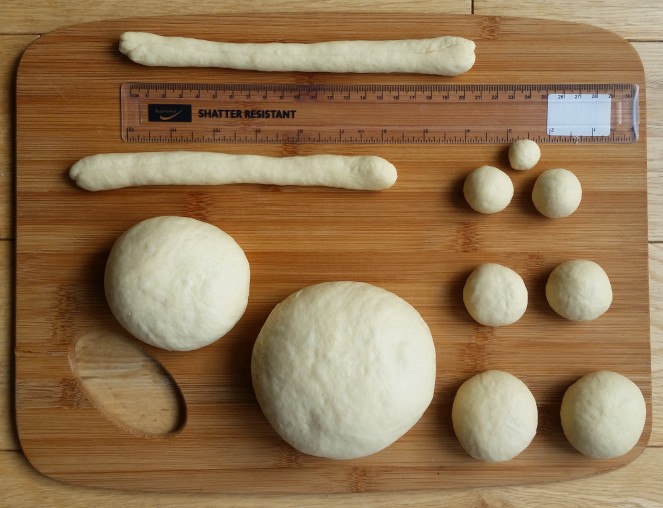 After you have formed the head, nose, cheeks, hands. feet and ears… the remaining dough will be for the tummy. It should be approximately twice the size of the head. (Don’t worry if it’s not exactly 300g – somewhere around 300g is perfectly fine.)

Now, go back to the head ball and flatten it slightly.

Using a scissors, snip 3 cuts in each of the feet to form the bunny toes.

For the ears, take each ball and roll it into a long snake, approximately 20cm in length.

For the tummy, flatten it to approximately the same thickness as the head.

As you work with each ball of dough, keep all the other dough covered as much as possible to prevent it drying out. I usually just throw a clean tea towel over the dough balls as I form them.

Line a large baking sheet with parchment, baking paper or a silpat liner.

Place the bunny head above, but just touching, the body.

Place the hands at the side, again just touching the body.

For the bunny ears, fold the long lengths of dough in half and position these on either side of the head, just touching it.

Place the bunny cheeks side-by-side, in towards the bottom of the bunny face and pop the nose on top of the cheeks.

Now, cover your bunny and leave to rise for approximately 45 minutes. (10 minutes before the end of the rising time, preheat your oven to 180C.)

Repeat all the steps above with the second half of your dough to make a second loaf.

After the rising time, remove the cover from your bunny and gently brush it all over with the eggwash using a pastry brush or clean paintbrush. Gently push two raisins into the face to form the bunny eyes.

Pop your bunny into the pre-heated oven for 20-22 minutes. When baked, your Easter Bunny Bread should be a gorgeous golden brown. Remove from the oven and allow to cool for 5 minutes before transferring to a wire rack to cool completely. When ready to serve, place the Bunny in his veg patch and bring to the table to a chorus of oohs and aahs!

A whole bunch of notes:

Source:
All credit to the totally gorgeous and incredibly talented Ms Rebecca Lindamood of Foodie with Family for inspiring this tradition in our home. Rebecca – you are a superstar and I think of you with immense gratitude every year when the Easter Bunny Bread brings such excitement to our kitchen table. Thank you.

Dedication:
For Lisa and for Maebh. Thanks for encouraging me to put this recipe online!